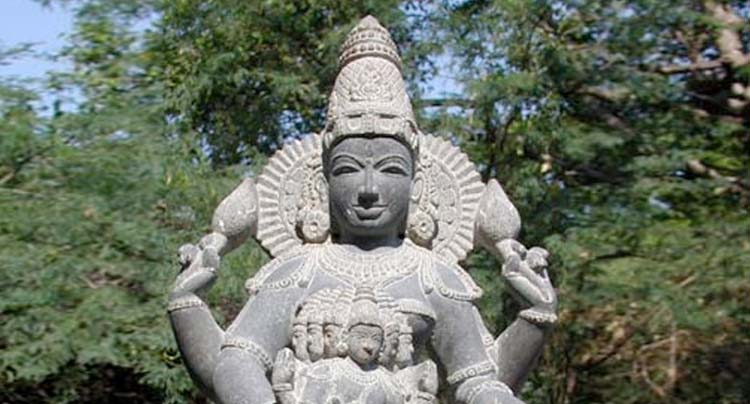 Maa Shakti is the divine goddess that gives birth to and nourishes all human beings.Shiva is the divine male form who is the paramour that courts Shakti and protects her.The two energies join together to manifest the unmanifest. It is really as simple as that.If the laws of Nature were allowed to follow their natural course, there would be no conflict between Shiva and Shakti, and the divine raas leela symbolized by Radha and Krishna would go on uninterrupted. But Nature has also bestowed upon man, stronger physical strength and instead of using this to protect his beloved, he has time and again used it to attack her, as symbolized by Duryodhana and his brothers against Draupadi. This has continued for generations, and the results are there before our eyes in this kalyuga.

Laws are being enacted, protests are being held, voices are rising, women are raising arms, sympathies are flowing all around. And the cycle of anger and angst and remorse and pain continues unabated. And it will continue unabated. Nothing will change with the present degeneration of Indian culture in this kalyuga. It requires a paradigm shift in awareness and consciousness.

No laws in the world can control the unbridled energy flowing within each human being. No police, no courts can take any action against this highly potent energy lying coiled at the bottom of the spine in each one of us. This energy in the mooldhara and manipura chakras can either take the form of divine kundalini energy rising up the spine and connecting all the chakras with the sahasara chakra and thereby with the Supreme Consciousness, or it can take the aggressive, violent form and attack the female energy. Of course there is a third possibility that it stays dormant for the most part, as with celibates and renunciates, but that requires a very high order of awareness and consciousness that is absent even with many high profile individuals in this category. The sexual energy that sits in the bottom two chakras has two and only two specific purposes under the laws of Nature. The first obvious purpose is for procreation so as to keep the manifestation going. The second purpose, which is highly sacred and esoteric and steeped in mystique, is for bringing the male and female energies into a spiritual union such that they become one with the Universe. This is the essence of Tantra. So long as Tantra was alive and mainstream, as depicted in the temples of Khajuraho and Konark, mentioned in many scriptures and reflected in various art forms, man worshipped the woman and treated her as a Goddess. When Tantra mysteriously disappeared into the background and became a taboo subject, the male domination over the female commenced its journey and has continued until today.

Tantra celebrates the free spirits of Shiva and Shakti, and while recognizing them as individuals, also emphasizes the importance of them coming together as a form of cosmic union. It is highly symbolic, highly esoteric and highly potent. In order to understand this cosmic union, it presupposes that the human being has evolved to a much higher plane of consciousness to understand and appreciate this cosmic union. When this higher level of consciousness is absent, the only purpose left for sexual energy is procreation. And if procreation is not desired by a couple or if procreation cannot be the purpose of all copulation, then we are left with a problem. This problem is lust.

Lust has been mentioned as a human weakness in all religions in some form or the other thereby recognizing that this can be the cause for mankind’s downfall as evident from today’s headlines. It brings mankind down to the level of a beast. When lust takes over, intelligence that separates mankind from the animal world disappears. Chakras close up. There is no flow of any energy, just raw sexual energy waiting to unleash itself at the first target. Even within the lowest of the three gunas, the tamsik guna, it is at the bottom of the pile.

Lust is the result of many factors, the most important being repressed sexual energy. As I mentioned above, sexual energy needs an outlet. It cannot remain inert. It is the potential that needs to manifest itself in some form or the other. Other than the spiritual rising of the kundalini and the procreative energy, most societies have provided various avenues for this purpose. These have not been the result of some organized effort by society but rather evolved in a natural manner. These include a healthy interplay of man / woman relationships outside
of marriage, access to arts, literature and various media that depict sexuality in an aesthetically pleasing manner that can be appreciated and enjoyed. Meaningful sex education in schools plays a very important role in removing any taboos towards human sexuality. When boys and girls are brought up together, intermingling with each other
freely, it helps create a healthy understanding and respect for the opposite gender. When they are segregated at each step, an element of curiosity and wonder starts taking over, and since the male energy is physically stronger, it starts making untoward advances. Public gatherings are segregated for men and women, there are separate lines
everywhere for the two, and in almost every walk of life there is a separation between the two. There is no healthy touching and patting and hugging. My workshops start and end with hugs. It is really funny and sad to see Indian women give side hugs (that barely last a moment) instead of a full frontal hug (that can last an eternity)!
Sex is taboo in India.

Something that is the very basis of life and a cause for celebration and joy and happiness, has been termed ‘dirty’ and relegated firmly behind closed doors. In the name of modesty and coyness and shame, the human body has been firmly locked behind the purdah. Parents do not discuss it at home and with families. Teachers shy away from it. The media only uses it for titillation. Whatever exposure that comes is mainly from the internet. There is an entire strata of society, mainly the lower middle class in the semi urban semi-rural areas, that has access to the internet. But this strata of society consisting primarily of males in the 15 to 25 year age group is disenfranchised, disenchanted, disillusioned and displaced and only partly educated. Until they get married they have no avenues for releasing their raging hormones. Frustration in an illiterate mind is fertile ground for giving rise to sexually violent thoughts. The result is inevitable. It has very little to do with promiscuous dressing by the opposite sex or portrayals on TV and in movies. Many societies around the world, including far less developed ones than Indian, are far more promiscuous but have a far healthier attitude and approach towards this very basic human activity. Yet, the incidence of sexual violence is nowhere near what we see in India.

It is all in the mind. The mindset needs to change. In spite of the deeply entrenched intolerance for human sexuality outside the conjugal world, there are significant changes taking place in India. This is coming about primarily as a result of both the genders of the younger generation studying and working side by side with an
increasing number of women joining the workforce. There are more opportunities for interaction and interplay, and the dynamics are changing fast and for the better. This is both good and bad. To the extent there is better tolerance and understanding of each other, this is a very healthy development. However, biologically and spiritually, a woman’s role is that of a nurturing mother full of unconditional love and compassion. To the extent that is sacrificed at the altar of equality of sexes, it only contributes to cosmic imbalance. The feminists who
strive for equality in all walks of life are as misplaced in their zeal as the masochist men who only believe in physical domination and abuse of women. The balance between Shiva and Shakti in accordance with the laws of Nature, that is the basis for manifestation itself, needs to be reestablished.

India is the land of Kamasutra and Tantra. Indian scriptures and mythology are replete with stories and anecdotes portraying free, noncommittal love and physical relationships between the two sexes. In fact many of the stories revolve around the very same gods and goddesses that are so revered in India. But unlike the sex of today, it was spiritual and uplifting and a play of the senses. Royalty and the common folks all equally indulged in this most basic of human instincts. Tantra is the masterful treatise on this subject, something that was looked upon by the entire world with awe and inspiration. There was no Sodom or Gonorrhea, but there was no repression either. It was
clean and sacred. There was a long prelude to the actual sexual act which itself took on numerous forms. Many of the yoga asanas are based upon strengthening the sexual organs and opening up the energy channels in the lower chakras. The kakasana is just one example of this. Food and nutrition, music and dance forms were in many ways
geared towards arousal of sexual energy.

Today, religious fundamentalism and intolerance along with the tamsik lifestyle have played havoc. On the one hand, he so called guardians of religion have woven a tight noose of intolerance around human sexuality outside of their control and on their terms, and on the other hand, the typical nutritional input in India is so abysmally low, that
there is no possibility for any saatvik nourishment for the chakras to open up. Instead they become more tightly clamped abetted by the tight clothing fad prevalent today. It is not possible to breathe free, and the only result can be frustration and resort to violent behavior. This is made all the more complicit since most Indians today have access to all forms of titillation through movies, TV, internet and other media, but heir real life has not kept pace with what is depicted. The social mores are still of the Victorian era. Religion, parents, politicians, teachers are all responsible for this total disconnect between Shiva and Shakti. In my sojourn around the globe, except for the repressed and oppressive Muslim countries, in no other country have I seen such sexual repression and such intolerance for public display of affection.

Unless this sacred connection between Shiva and Shakti is reestablished in India through a collective conscious shift of the social paradigm, Maa Shakti will continue to be abused and raped. It has nothing to do with revealing attire or flirtatious behavior. No laws or other action has the power to stop it. The evidence is right before our
eyes.