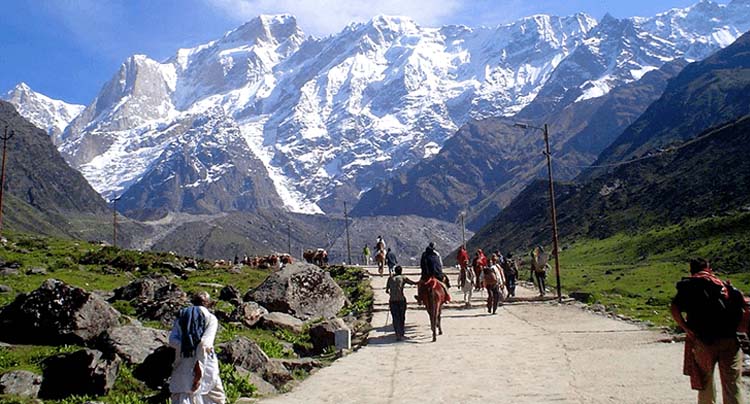 In Zen we say, ‘Not a leaf moves without reason’. Everything that happens all around us and in our lives is part of a grand plan. Nothing is random. Every cell of every creature, every grain of every stone is connected to each other, has a role to play and a story to tell.

For readers of this magazine and for many who are on the spiritual path, all of the above may sound as clichés. But therein lays the truism. And the evidence appears before us regularly. The latest being the Uttarakhand havoc and fury unleashed by Nature. There are two ways to look at this happening.

 The Resolute Indian Belief System Indians by the millions are part of this system. According to this belief,
God (does not matter which one) exists or lives in certain spots scattered around India. This belief has been perpetrated through a liberal dose of mythology mixed with a potent dose of vested interests from religious zealots and corrupt politicians. Year after year, there is a mad rush for Amarnath, Vaishonevi, Chardham and Kailash Mansorovar yatras. There are numerous others, but these are the stars that clamor most attention, partly because they are accessible only for short periods of time and partly because they all involve navigating through some very treacherous mountain areas in North India.

Each of these yatras has had its share of tragedy and controversy over the years, including natural disasters that have befallen them. But none come close to what we have seen in Chardham this year. Thousands have perished. These are people, who were part of this belief system, who had supposedly gone on the yatra to experience God, be with God or at least feel closer to God. Shouldn’t God have been happy that His devout followers had come to pay obeisance, braving such hardships? Shouldn’t He have been pleased and showered his blessings on these fortunate few who get to come for his darshan? So instead, why did he rain fury? What happened to the deeply entrenched Indian belief system that attracts thousands of Indians from all over India to this part of the Himalayas seeking salvation or penance for their sins or praying for something or the other? This is the land of ‘attithi devo bhava’. God Himself is not supposed to behave in this destructive manner. So what happened?

Are you sure God resides in these abodes?
 The Law of Karma
India is one of those intriguing places where people will have animated and heated discussions even on the most complicated topic as if they were the originators of that thesis! Karma is one of the most popular topics that people bandy about all the time. Most have no clue what the Law of Karma is all about. Ask them and they will conveniently retort, “Oh read the Gita, it is about Karma”! Since this is something that resonates so well with most people here, let us look at the second way from which to understand this disaster.

If you believe in the most simplistic version of the Law of Karma which suggests that your fruits are the results of your action, then this tragedy is really easy to understand. One only has to shift one’s gauze from the individual micro level to the macro level. The Law of Karma is not dependent on a belief in God. It transcends the Gods themselves who also become subject to this Law. After all, even Krishna had to pay a price for the various lies and deceit he indulged in the Mahabharata war. Indian mythology (part of the Indian Belief System above) is
replete with stories where various Gods use this Law in one-upmanship to establish their own superiority. Narad Muni is the notorious catalyst for this. So, if man plays havoc with Nature, man will bear the fruits of that action. And it has, in Uttarakhand.

Mankind has pillaged and plundered and destroyed and raped the beautiful Himalayan mountains and its meandering rivers that all rush down to become the mighty and holy Ganga. We swear by the holiness and divinity of this great river, yet turn a blind eye when its various siblings that originate in the Chardham area are held bondage and
captive through unbridled building of dams and their impact on the adjoining ecology. The thousands of pilgrims and other residents in the area flush and throw tons of plastic and other garbage into these pristine rivers and the forests surrounding them. Poorly designed and executed roads are cut into the mountainside with scant respect for
topology and geology. The already fragile infrastructure that can barely sustain the number of year round residents in the area is expected to handle throngs that are many fold that number. The fumes from the thousands of vehicles that clog the roads each summer are enough to choke the hardened and jaded urban dweller. Mother Nature is not used to this. Dwellings and structures of all kinds, most of them precarious and of very poor quality, dot the landscape in every habitable area. Many of them are built right into the rivers. River beds are eroded and river banks are intruded into without proper reinforcements. Even a very famous ashram in the most spiritual town of Rishikesh has not hesitated to reclaim a part of Ganga as its own so that it may accommodate ever growing crowds for its famous Ganga aarti. That structure too was swept away by the mighty force of Ganga! The Law of Karma never fails. As you sow, so you reap. Mother Nature is unrelenting. She will not allow mankind to tame her. Every once in a while she makes it clear who is supreme. But it is the unfortunate fate of mankind in India that it continues to remain in this self-imposed stupor.

I went on the Chardham yatra more than 30 years ago when I was still a student. Even at that time, it was miserable. I reached Kedarnath but refused to go to the temple. I came back to Joshimath and refused to go to Badrinath. Gangotri and Yamnotri were out of the question There was litter and human waste all around. . I swore I will never come back. I went to Kailash Mansarovar 7 years ago. I saw people falling sick all around me, some returning to Kathmandu, some dying. I made it to Mansarovar but not Kailash. Some of us had to be evacuated by
helicopter. As an atheist, I did not go on these trips to seek God, and sure enough did not find him lurking behind some tree or hiding in some temple. Much later, as I continued along on my spiritual journey, I found sitting inside me all along!